In Chhatarpur and Jhansi districts of Bundelkhand, over 100 small and medium farmers have shifted to solar powered irrigation with the support of Sustain Plus Energy Foundation and Haritika, a local NGO based in Madhya Pradesh. Efforts to transform the agricultural landscape in the region began in 2020 and has grown across 5 blocks and 30 villages, irrigating over 700 acres at present. Bundelkhand is a historic mountainous region of central India, spread across six northern districts of Madhya Pradesh and seven southern districts from Uttar Pradesh. While these regions have vast resources in terms of land, forest, minerals, the economy is predominantly based on agriculture. Yet, agriculture practised in the region is largely subsistence in nature.

The key challenge small and medium farmers face is the lack of availability of water and unreliable irrigation facilities that prevent optimum productive use of land. For instance, in Chhatarpur district, only 50% of the total available land area is under cultivation, with only about 50% of the total sown area cultivated in Rabi season. Moreover, only 40% of the total sown area in the district is irrigated. Majority of the farmers are completely dependent on rain-fed agriculture, especially in Bijawar block, due to poor irrigation facilities and water scarcity. As per CGWB’s block wise groundwater resource assessment 2020 Bijawar block in Chhatarpur district, Madhya Pradesh, falls under the category of semi-critical. Agriculture is largely rain-fed in most of the area, while in few places where the level of water in the wells are sufficient in the event of good rainfall, few farmers are able to cultivate single crops in Rabi with the use of electrical pumps.

Pooran Yadav of Vijaipur village in Bijawar, owns agricultural land spanning across 20 acres that has been unirrigated for many years due to the absence of irrigation facility. Like many others, he attempted drilling a borewell, going up to 180 ft deep, and yet was unsuccessful. As a consequence, him and other male members of his family migrate to towns and cities to work as daily wage workers as a means of livelihood. 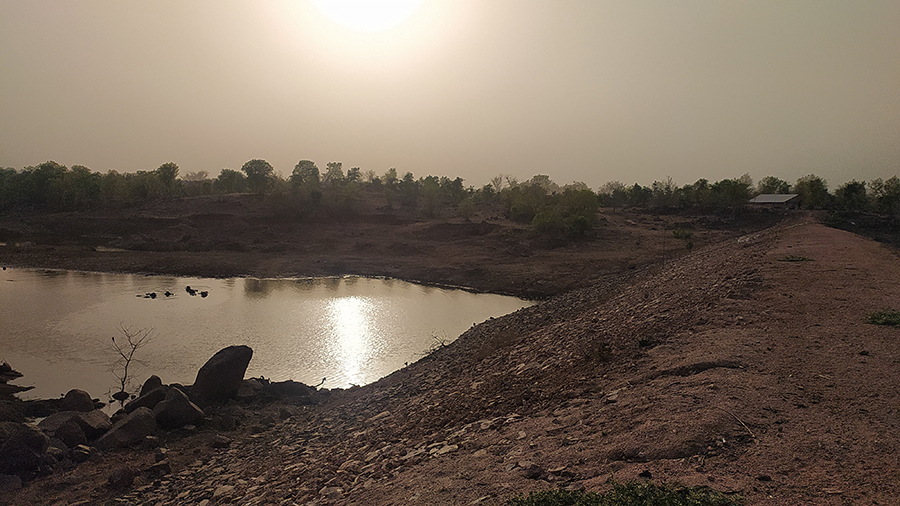 Over the last 20 years Haritika has been committed to working on integrated water resource management and watershed development activities to improve availability of water in the region. Haritika has been involved in construction of water reservoir tanks, stop dams, and check-dams in the district. Their recent efforts have been in the form of construction of a tank reservoir in Vijaipur village, spending over 33 crores with an aim to harvest rainwater for irrigation of up to 200 acres, majority of which has been unirrigated land. The reservoir tank of 30,000 cu.m. was erected in mid 2021 on common land of the Panchayat, supplying water for irrigation to 10-12 nearby farmers.

Pooran Yadav is one of the farmers with land adjacent to the reservoir tank. Given the absence of an electricity connection in this remote area and high cost of diesel, he took this opportunity and invested savings from his previous work as a down-payment towards installation of a 5HP solar pump supported by Sustain Plus Energy Foundation to enable reliable and affordable irrigation of his farm.

With the combined resource of harvested rainwater and surface solar pump installed in January 2022, he is the first generation of farmer in his family able to irrigate his land in Rabi season and rely on agriculture as his primary occupation. Using a flexible pipe to draw water from the reservoir, he irrigated wheat sown in 18 acres of land and produced over 160 quintals of wheat. He earned an estimated net income of over Rs. 2 lakh rupees from the cultivation of wheat, having sold only 25% of the yield at the rate of Rs.1800 per quintal to pay off the input loan from vendors/moneylenders. He cultivated mustard and sorghum (jowar) in the remaining 1 acre each for household consumption. In totality, solely from the revenue earned from cultivation in the Rabi season, there has been a 60% increase in income, compared to his earnings as a daily wage worker.

Post harvesting season, his family has been exploring other productive use of water by brick making. Water from the reservoir is lifted with the help of the solar irrigation system and used in binding of sand and baking to create bricks. This has further increased Pooran Yaadav’s household income and kept him from migrating to cities in search of jobs. 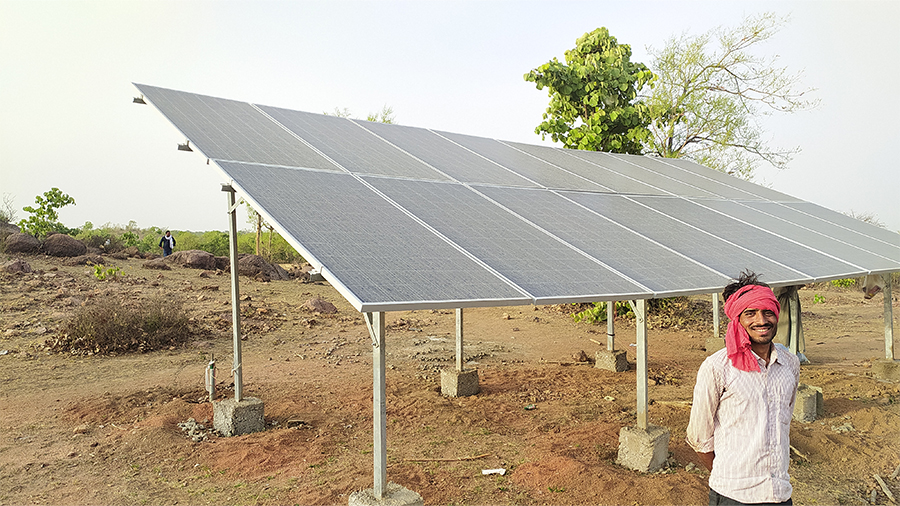