In Itiha village of Bahraich, Uttar Pradesh, 19 small farmers have come together to share a solar irrigation system, calling their group Sarita Vikas Sinchai Samiti. The 5HP solar irrigation system was installed in November, 2021 to irrigate an area of 25 acres. Each farmer contributed towards the land preparation, labour costs, and underground pipelines, in addition to the nominal contribution of Rs.700 for every bigha of land covered under the irrigation system. The system is installed on a group member’s land, who also operates and looks after it, directing water to the designated outlet as per the scheduled roster.

Prior to the solar pump, 10 farmers from this group owned second-hand diesel pumps. For them, the cost of irrigation was ~Rs.200 per cycle of irrigation for 1 bigha of land. The remaining 9 farmers did not own diesel pumps and rented them from other farmers, which costed them an average of Rs. 400 per bigha for irrigation. The rising diesel prices made irrigation even more expensive, forcing some farmers to under irrigate and cultivate only in two seasons, instead of all three.

In addition to the fuel costs and pump rentals, labour costs were an added expense as farmers had to hire labour to irrigate ﬁelds during the non-monsoon months when a 10 foot pit needed to be dug to lower the diesel pump and lift water. Apart from this, transporting diesel pumps to fragmented land parcels and moving ﬂexible water pipes across ﬁelds was also a time consuming and strenuous activity.

In contrast, after adopting the solar pump and organising themselves as a water user group, most of the diesel pump owners have completely given up their pumps and the other farmers do not have to depend on pump rentals anymore either. Irrigating their ﬁelds has become a lot more convenient and cost eﬀective, with a signiﬁcant reduction in drudgery. Instead of charging farmers for irrigation by the hour, a volumetric tariﬀ has been set. The system includes a water meter, and a mutually agreed tariﬀ of Rs. 2/unit of water is paid by all group members. The revenues are collected and deposited in the group’s savings bank account, part of which is used to pay the pump operator and the rest is used for maintenance and repairs of the irrigation system. Interestingly, the initial agreed tariﬀ was Rs. 1.5/unit. But in order to check the over exploitation of groundwater, the group decided to increase the tariﬀ to Rs. 2/unit.

Ram Langan, one of the member farmers, used to cultivate paddy, maize, wheat, and pulses in 10 bighas of land in the Kharif and Rabi seasons, with his secondhand diesel pump. Since the installation of the solar pump, Ram Langan has disposed oﬀ one of his diesel pumps, and irrigates 6 bighas of his land completely with the solar pump. Since using the solar pump, he has also started cultivating peas in one bigha of land and spent only Rs. 200 to cultivate 50 kgs of peas. He saved Rs. 700 on diesel. This year he plans on cultivating groundnut and vegetables in the Zaid season owing to the aﬀordable cost of irrigation.

In partnership with The Aga Khan Foundation, 50 such community irrigation pumps have been implemented in Bahraich, providing nearly 900 families with a reliable and aﬀordable irrigation solution. It has made these communities more climate resilient, improved their own food security and has enabled them to increase their productivity and yield through appropriate irrigation levels, as well as encouraged them to diversify their cropping patterns towards high value crops. 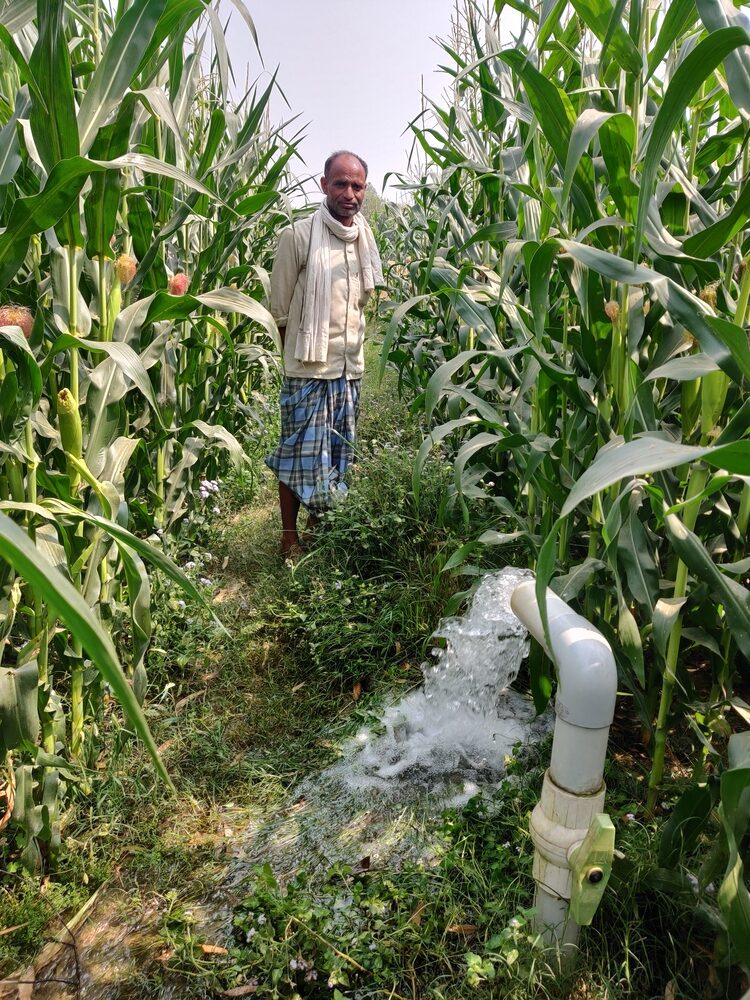