The universalisation of elementary school education has resulted in schools being set up in nearly every district of the country. Children in the remotest villages can now go to a dedicated physical space for education. Khunti and Sirohi, two remote districts in Jharkhand and Rajasthan, are a case in the point. Even though quality education has been a focus area in both regions for a decade, the infrastructural capacities of the schools are lacking even in the most basic lighting, cooling and water supply requirements.

Bholanath Choudhary, Headmaster of the Bhoot Middle School in Khunti, Jharkhand shared that even though the school has a grid electricity connection, power cuts were a regular daily occurrence. The school is well equipped with projectors and smart classes, but due to frequent power cuts, lectures were often interrupted, forcing teachers to continue without any teaching aids. At times classes were completely suspended as classrooms were too dark to read in and the heat unbearable.

In 2021, a 2 KW solar power system was installed at the school to provide reliable power for the smart class systems and lights and fans for a conducive learning environment. Suman Kumari and Nishit Munda, students in Classes 7 and 8 at Bhoot Middle School shared that now their classes were conducted without interruption and students also enjoyed the learning process through computers and projectors a lot more.

33 rural schools have been similarly supported to to create suitable learning environments. The success of the model was replicated by the state government, under which an additional 25 schools were solarised directly by the government.

A second dimension that highlights the extreme lack of infrastructural capacities in rural remote schools, is poor water access. Water supply in schools is essential not only for consumption (drinking, midday meals) but also for basic hygiene (hand washing, sanitation). Some schools in Khunti manually arrange water from 3-4 kms away for daily use.

For UPG Government Middle School, Laterdih, access to clean drinking water was a challenge that has persisted despite over 60 years of establishment. Children and villagers had to fetch water from the nearby chua (small pond), which was not safe for consumption. With CInI, Sustain Plus supported the installation of a 2HP solar pump near the school, with a complete pipeline and water distribution network in the school, to meet sanitation and drinking water needs. Even villagers are welcome to use the water from the school for their consumption. The school administration plans to reuse waste water to cultivate a small kitchen garden, to supplement mid-day meals provided at the school. 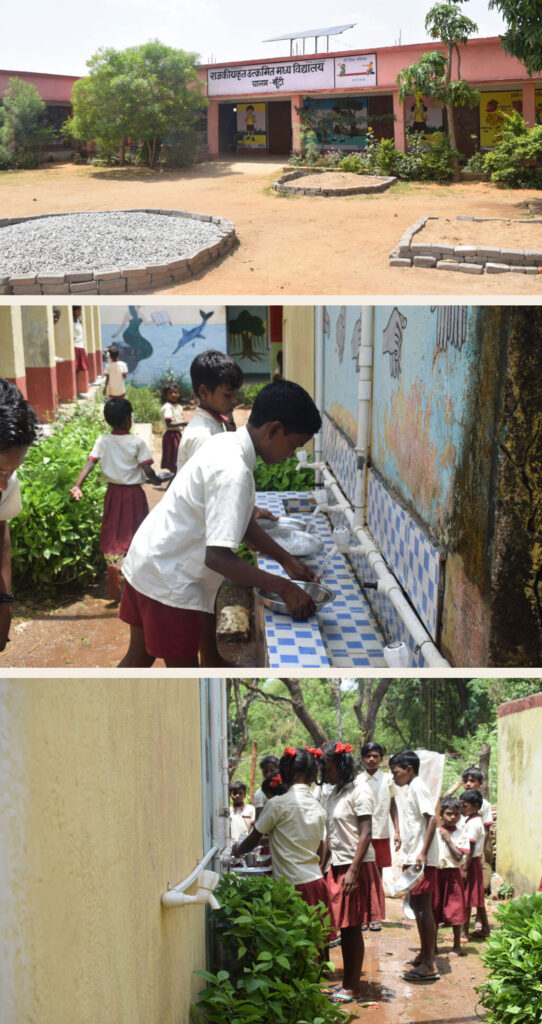